TNT Pawn is Proud to Partner with Make-A-Wish® Southern Nevada to Grant a Coleman’s Wish!

“We are thrilled and honored to support Make-A-Wish(R) Southern Nevada, and to be able to grant Coleman’s wish!” says Shandry Lozano, Shop Manager of TNT Pawn Las Vegas. “Make-A-Wish is near to everyone’s hearts here at the store, and we wanted to support this wonderful organization and our neighbors here in Southern Nevada.” 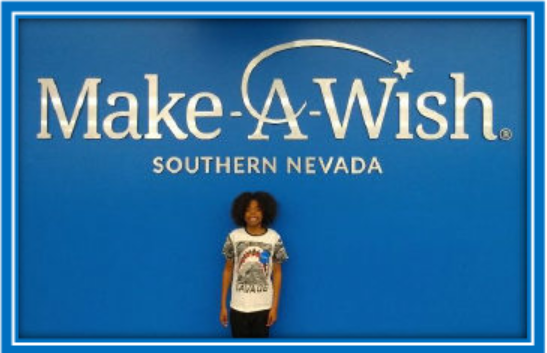 About Coleman’s Wish… Fifteen-year-old Coleman is a reserved and calm kid when you first meet him, but once you get to know him, he will open up and show you how much of a bright kid he is. Coleman excels in putting together puzzles and figuring out engineering and computer problems. During his free time, Coleman loves to play basketball and video games on his PlayStation. Along with playing video games almost every single day, Coleman also loves to write his own music! At ten months old Coleman was diagnosed with a blood disorder. Treatment of this disorder primarily consists of pain management, vitamins, and blood transfusions. He must make sure that he is hydrated properly to avoid going into a crisis. Coleman has endured several surgeries due to his diagnosis, including the removal of his tonsils and his gallbladder.

Coleman, now a teenager, struggles with his diagnosis. He doesn’t want his classmates to know about his condition, or for others to think he is weak because of it. Coleman cannot do a lot of physical activity or overexert himself, limiting his dreams of playing basketball with his friends. Due to his condition, video games and music are a couple things Coleman can enjoy in life without risking overexertion. After much thought, Coleman has determined his wish to have an in-home recording studio! With this room, Coleman imagines waking up and going straight into a day of making music. Being the writer and producer of his own songs, it is important to Coleman that he can have the best equipment to further his passion. Knowing he will have state-of-the art music equipment, Coleman is excited to take his music to the next leveland share it with everyone!

Make-A-Wish grants life-changing wishes for children with critical illnesses. According to a 2011 U.S. study of wish impact, most health professionals surveyed believe a wish-come-true has positive impacts on the health of children. Kids say wishes give them renewed strength to fight their illness, and their parents say these experiences help strengthen the entire family. Make-A-Wish Southern Nevada is part of one of the world’s leading children’s charities, serving children living in Clark, Nye, Lincoln and Esmeralda Counties. With the help of generous donors and more than 500 volunteers, Make-A-Wish Southern Nevada has granted more than 2,200 wishes since its inception in 1996. Visit Make-A-Wish at snv.wish.org.